Pardee 28 is dual purpose, collaborative computer classroom. It can be used in two modes – Presentation and Breakout, which are described in more detail in this document.

There are 30 student PCs installed in 6 hexagonal tables. Each table has a 55” LCD display on the adjacent wall. There are also auxiliary video inputs (with audio) at each table for VGA, DVI, or HDMI sources.

The instructor’s station houses a PC with dual displays, Document camera, Blu-Ray DVD player, and the same Aux Input sources as the student tables with the addition of an audio-only input for iPod or other 1/8” stereo mini sources.

A 10” touch panel on the instructor’s workstation controls the room’s operation. Individual control panels are located on each table for when the room is in Breakout Mode.

The displays for the instructor and student PCs are housed within motorized lift mechanisms, which can be controlled via the touch panel or via physical buttons on the lift bezels (depending on mode selected)

There is also a private consulting/conference room that contains a 42” LCD display with a wall plate accommodating VGA, DVI, or HDMI sources with audio.

Powering up the room AV system

Start the system by touching the [Power] button at the center of the touch panel.

This powers on the displays and lifts the instructor’s PC displays. It also puts the room into “Presentation mode” by default. 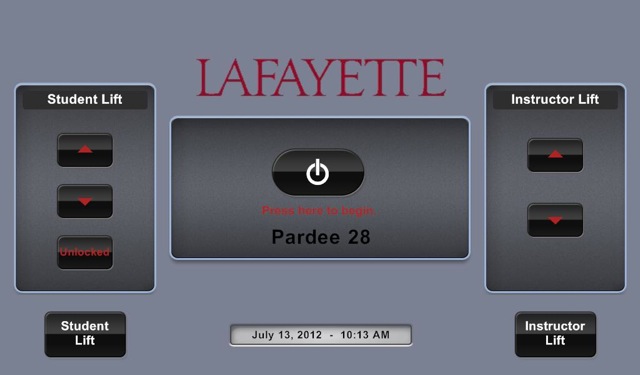 The PC display lifts are controlled primarily from the touch panel. If the AV system is powered off, there are two lift control buttons, [Student Lift] and [Instructor Lift], located on the bottom of the touch panel start page.

The lifts can be operated without having to turn on the AV system.

Pressing the [Instructor Lift] button pops up a window with Up / Down buttons.

Pressing either the [Instructor Lift] or [Student Lift] button a second time causes the pop-up to disappear.

Once the AV system is powered on, the lift control buttons appear along the left edge of the touch panel screen. 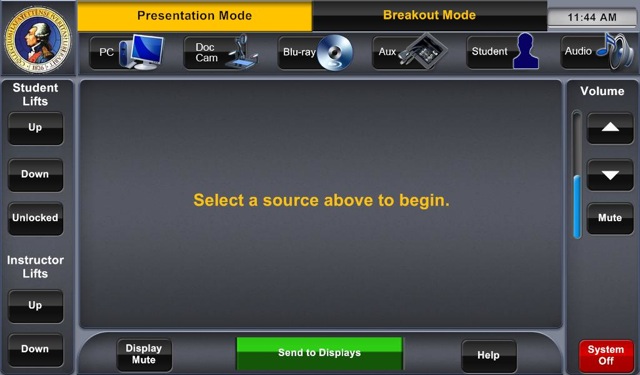 Presentation mode can be selected by pressing the [Presentation Mode] button on the top/left of the touch panel screen.

In Presentation Mode, the room functions like a standard Smart Classroom with a few differences and added capabilities.

Selecting one of the source buttons pops up an additional controls window in the center of the touch panel (when other controls are available) and also causes that source’s video to be displayed on the instructor’s right PC monitor, which functions as a preview screen.

Pressing the green [Send to Displays] button located at bottom-center of the touch panel sends the selected source’s video to all six of the LCD table displays.

Source audio is played through six ceiling speakers, located above each table. Audio (Volume up and down, Mute) can be controlled via the “Volume” controls pane on the right side of the touch panel.

Displaying a Student Computer On All Displays 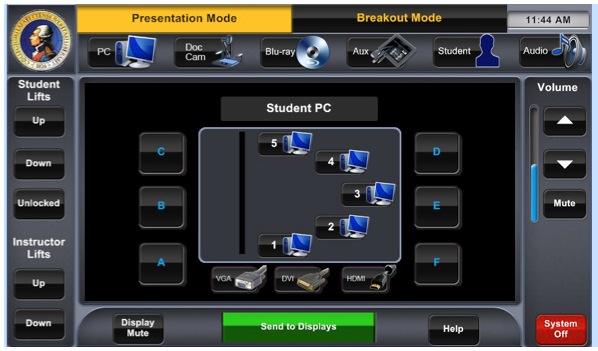 It is possible to send the video from any student computer (or any Aux source connected at the student tables) to all six displays.

You can preview the video on the student PCs to determine which student PC you want to display.

Press the [Student] source button. A pop-up window on the touch panel now shows buttons, labeled A-E, representing the tables as they are arranged in the room.

Press the button corresponding to the table where the desired source PC is located.

Another pop-up window will be displayed representing the locations of the PCs relative to their positions around their wall display.

Press the button corresponding to the desired PC.

The selected PC’s video will now appear on the instructor’s preview (right) monitor.

Once you have selected the desired student PC in this manner, press the [Send to Displays] button to route the video to the table displays. 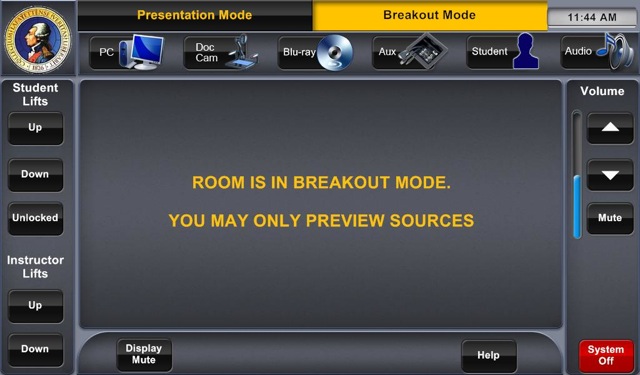 While in Breakout Mode, any audio accompanying a selected source is routed through the small speaker installed in the controller housing. The speaker volume is controlled by the volume knob on the controller.

Should a problem occur during class that requires assistance, please press the [Help] button on the lower right of the touch panel. On the pop-up page that follows, confirm your request to have a technician dispatched to the room.

Each of the student tables has a box with VGA +audio, DVI +audio, and HDMI +audio. At the instructor’s station, these connections are located at the top of the equipment rack. Inside the instructor’s workstation are containers with cables for each type of connection.